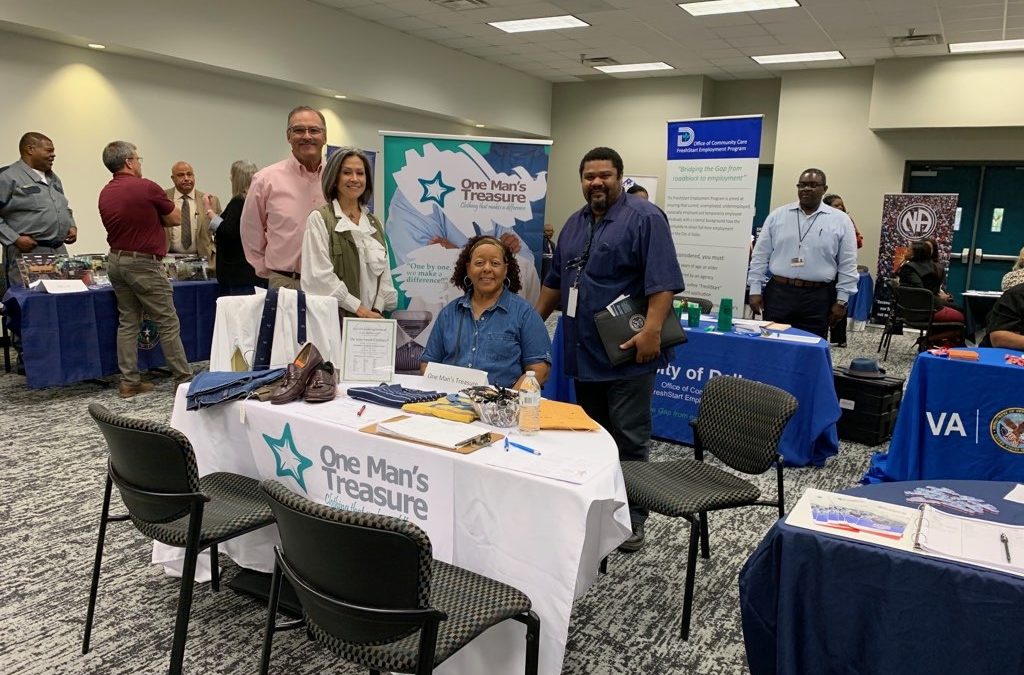 The Episcopal Foundation of Dallas is pleased to support One Man’s Treasure in Rockwall.

Founded in 2005 to serve a vulnerable and often overlooked segment of the population,

One of the many challenges to successful reentry into society these returning men face is a critical need for decent clothing for daily living and that was appropriate for job interviews. Released with only $100 and an ill-fitting shirt and pants, those men who do not have families go into transition homes, struggle to find housing that will rent to the formerly incarcerated, or become homeless. Many come back either to families who are indigent themselves are not able to financially assist them with even their basic needs of food, shelter, clothing and transportation. Employment is critical for all of these men as they seek to change the direction of their lives and difficult to obtain without assistance with the meager funds they have.

Texas Department of Criminal Justice statistics show that over 50,000 men are released from incarceration in the state each year. 9000 of those indigent men return to the Dallas area. Since its founding, One Man’s Treasure has provided clothing to more than 14,000 men including a record 1400+ in 2020.

One Man’s Treasure is the only nonprofit in the Dallas area with a program of providing clothing specifically to serve these often overlooked formerly incarcerated men.  The application process is simple. When the client is released from prison, a full set of clothes is collected after talking with him on the phone as to sizing and color choices. The clothing is free of tears or stains to provide a sense of confidence in their appearance as they begin their search for employment. The typical set of clothing includes five shirts (dress, business casual, and polo style), two pair of pants and/or jeans, work boots or shoes, a T-shirt, a tie, five pair of new underwear and socks, and during the winter months, a coat, hat and gloves. Suits or sport coats are provided, if requested. For clients who have been offered an employment position, we provide special clothing needs for his specific type of employment, such as work boots, work jeans, or black shirts and pants for work in the hospitality industry.

Studies show that the first month after release is a vulnerable period during which the risk of becoming homeless and/or recidivism is high (Cortes & Rogers, 2010)1; therefore, the clothing delivery is made within the first week of the client contacting our organization to provide them the opportunity to begin a timely job search process.